I would like to share with you the story of the problems I had with my Epson SC-P800 and Hahnemühle Photo Gloss Baryta A3+ paper. I hope it is going to save for some of you the troubles I had in figuring out why all my A3+ prints were getting damaged in in the printing process.
I used to print quite a lot about 10 years ago. I had an Epson 3800 printer and my favourite and most used paper was Harman Photo Gloss FB AI. A beautiful, heavy, slightly glossy baryta paper. I stopped printing when I moved to Asia in 2012. When I moved back to Poland last year I felt like printing again. So I bought the current version of my old printer – a two generations younger inkjet Epson SC-P800.

Then I started researching papers and I have found out that my favorite paper was now called Hahnemühle Photo Gloss Baryta, either due to some kind of a cooperation between the two companies or for some other reasons. So I bought two boxes of the A4 size (25 sheets in each) and one box of A3+ (25 sheets). I have also downloaded from their website the ICC profile for the printer. So far so good.
I started making A4 prints of some of my favourite photos. They turned out beautiful, as good as I remember from my printing 10 years ago. I have made about 50 prints and most of them got printed with no issues. On one or two there were random ink smudges, not on the edges of the print but inside the image. Several prints were damaged by regular, parallel lines that looked like some kind of marks or scratches. 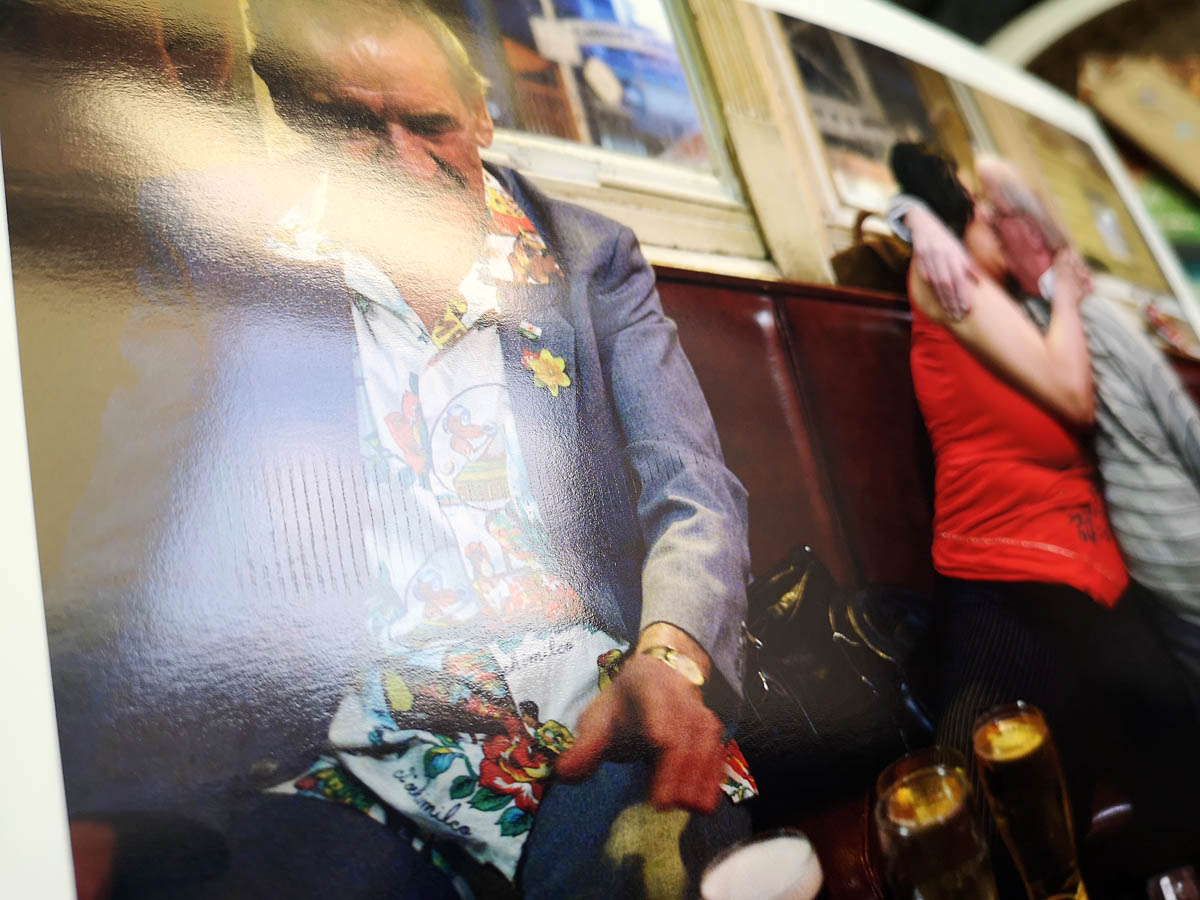 A wast majority was well printed, so I was not too worried about these occasional troubles. However, each damaged prints had to be made again. This meant wasting ink and paper.

Then at some point I decided it was time for making larger prints. So I took one of the Hahnemühle Photo Gloss Baryta A3+ sheets out of the box, loaded it into the printer and made a print. And here is what I saw. 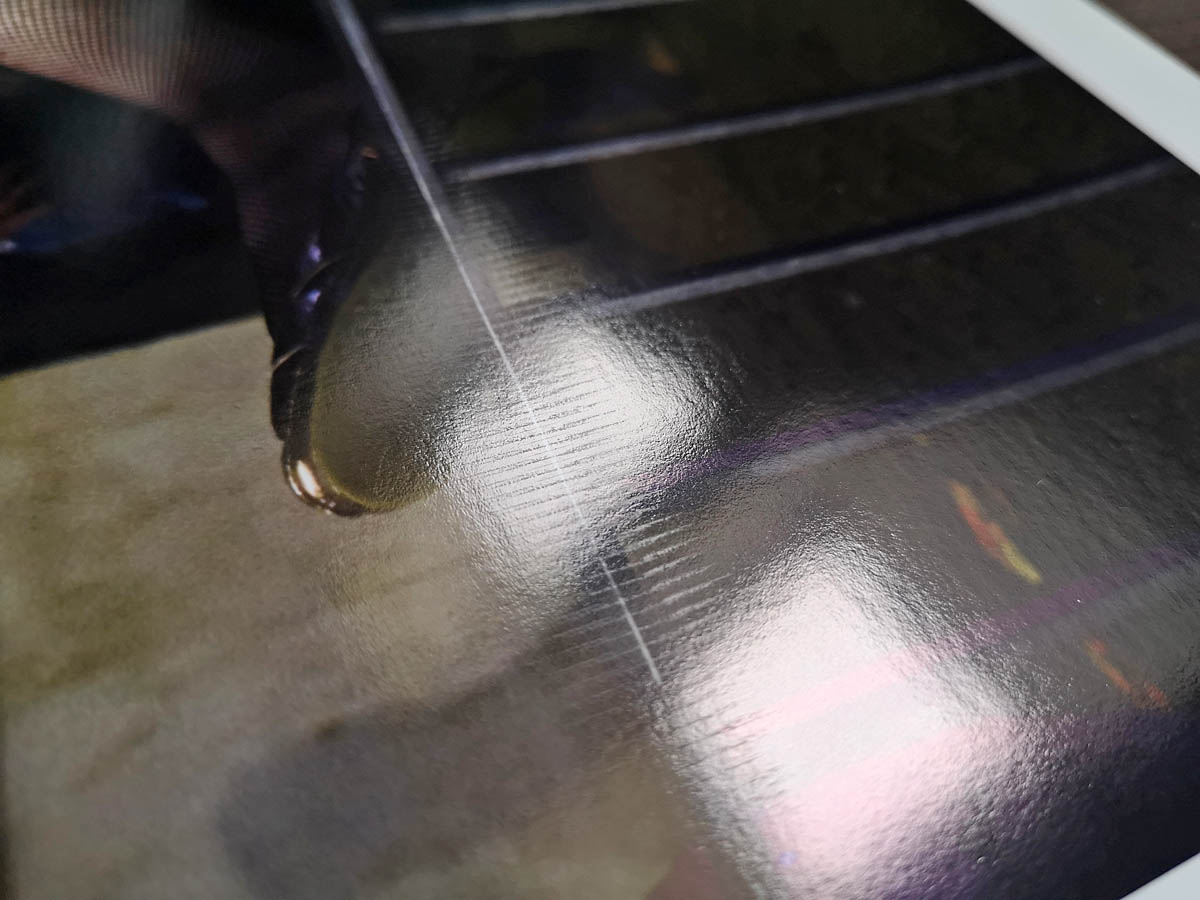 A lot regular marks on the print surface. The print was damaged. Quite a lot of ink went into making this print, the paper is not cheap either. All wasted. Not good. What went wrong? What are these marks? What caused them? So I have started searching on the Internet hoping to get the answer. I found some discussions where “pizza wheel marks” were mentioned, making me think that maybe some wheels or rolls inside the printer were causing these damages. A general advise was to go into the “Paper Configuration” dialog and change some default settings – increase the “Platen Gap” to the “Wide” setting and set the paper thickness to a larger value. The paper thickness setting is specified in tenths of a millimeter. For example, a value of 3 means 0.3 mm. Hahnemühle Photo Gloss Baryta thickness is 330μm (0.33mm). I increased the default value of 3 to 4 and set the Platen Gap to “Wide”. I loaded the paper using the “Front – Fine Art” feed. Then I tried making another print. The result was damaged again by the same type of marks on the print surface.
A few days later I tried again and got the same result – the same type of marks on the surface. I had enough. I thought there was something wrong with this printer. I used this paper years ago and never had such troubles. I contacted Epson Poland and sent the printer to their service for checking together with damaged prints for inspection. I got the printer back a few days later. They said the printer was working properly and the damages on the prints were caused by the printer’s head scratching the paper while printing. A possible cause of this could be either some wrong printing settings or the paper’s fault. Somehow I was hoping the issue had resolved itself, so I made another attempt. I started printing and stopped soon after I noticed the scratches on it. 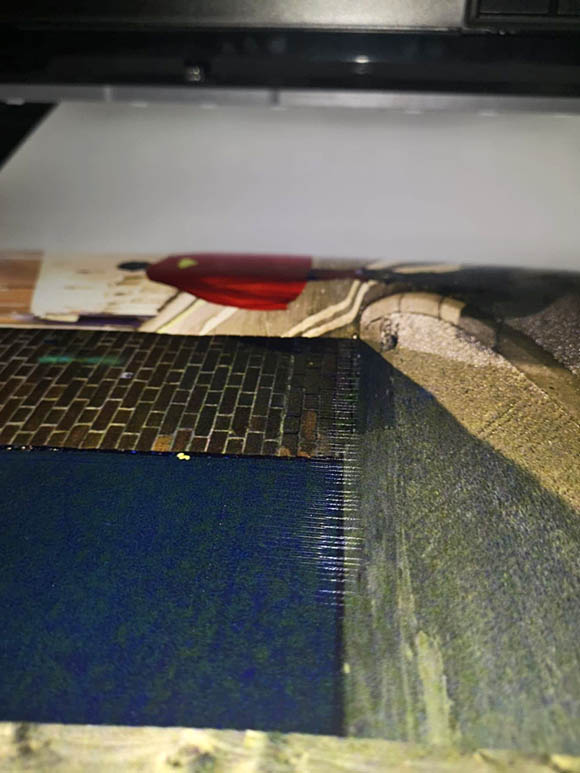 There was a lot of quite deep scratches, nothing has changed. So it is the paper.
I did not know what to do so I resorted to asking on my facebook for advices. I was hoping someone experienced similar problems. I got some useful hints. One of them was to make sure the paper is perfectly flat before feeding it to the printer. I looked at the paper and indeed, the edges were slightly curled upwards. I was aware that the paper was not perfectly flat, but I thought during the printing the printer’s rolls would keep it flat inside the printer during the printing process.

I rolled the paper gently in its original plastic wrap outwards and secured it in this rolled position for some time. 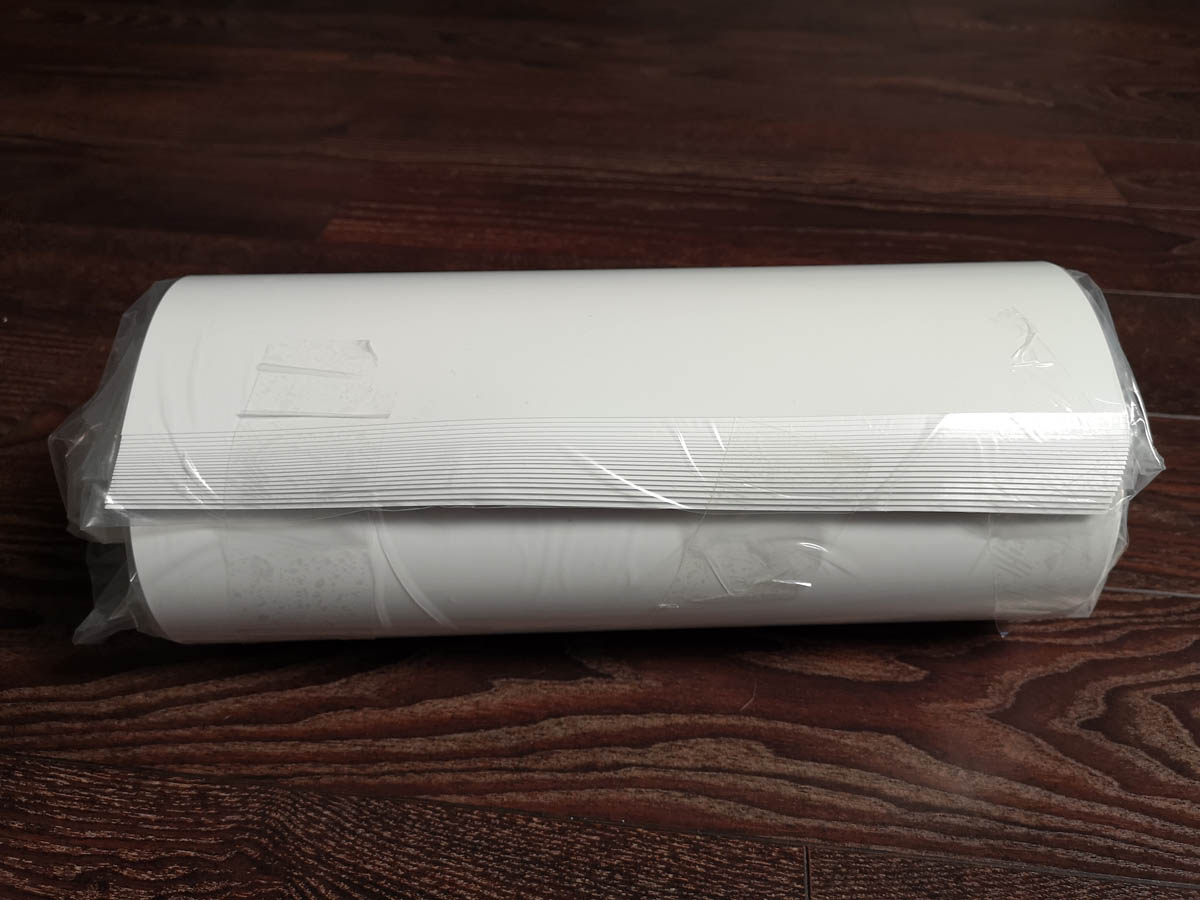 After some time the paper was flat, the edges were not curled upwards anymore. 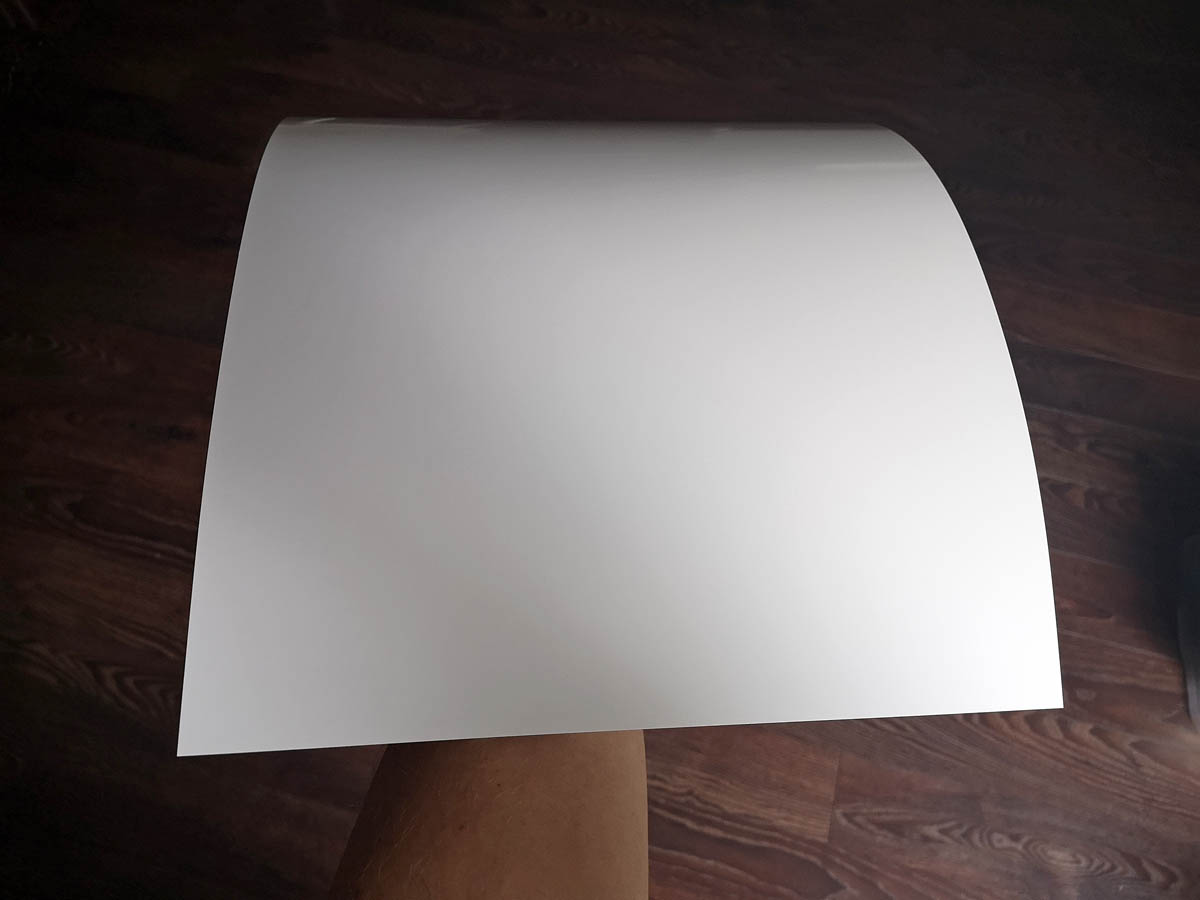 So I tried printing again. Soon I could hear an unusual sound when the head was moving – I think it was the printer scratching the paper! Looking inside the printer’s front tray with a flashlight I could see the paper touching the rolls, but it was not flat anymore! Looks like it was bending slighly upwards and downwards when the ink was hitting it. These waves were high enough to be scratched by the moving head. 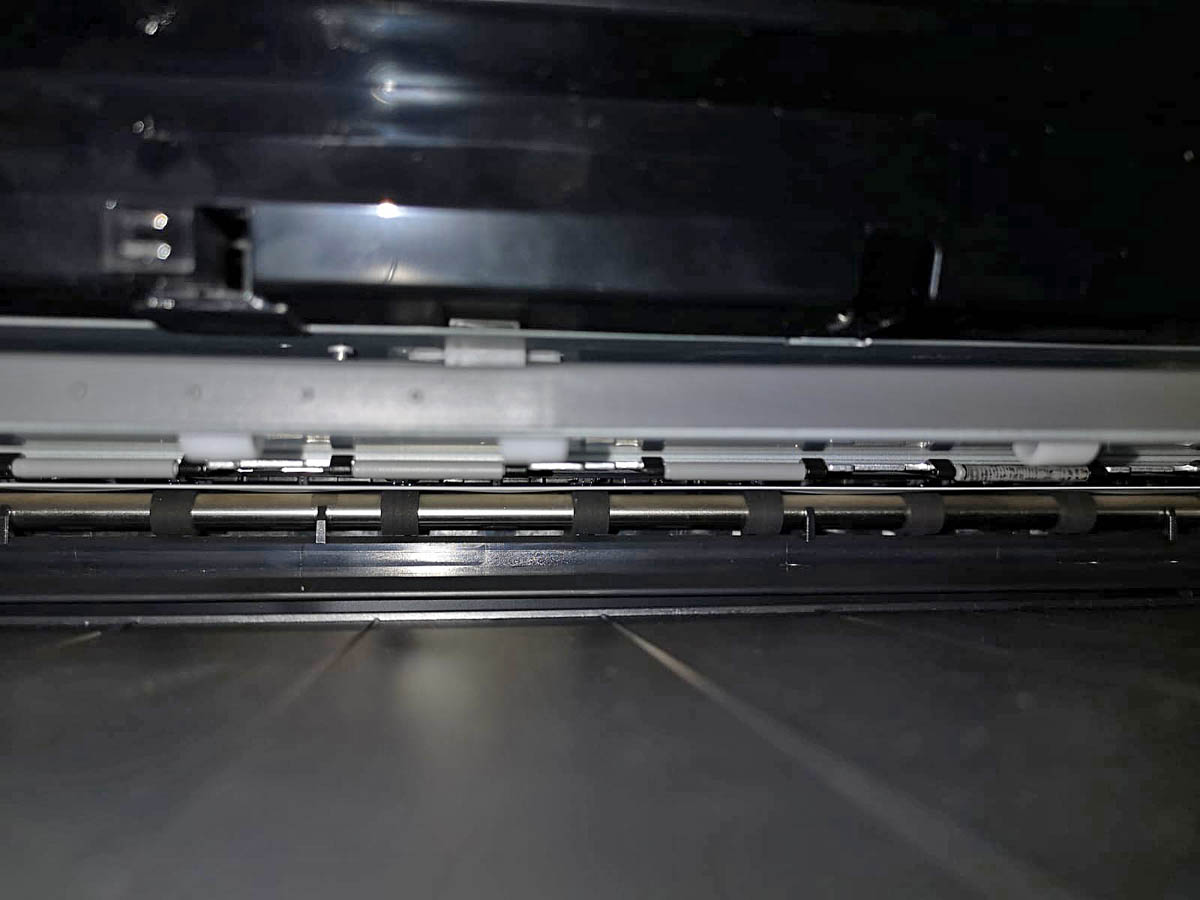 When the print started emerging out of the printer I could see the scratches. So I stopped the printing process and looked at the print. 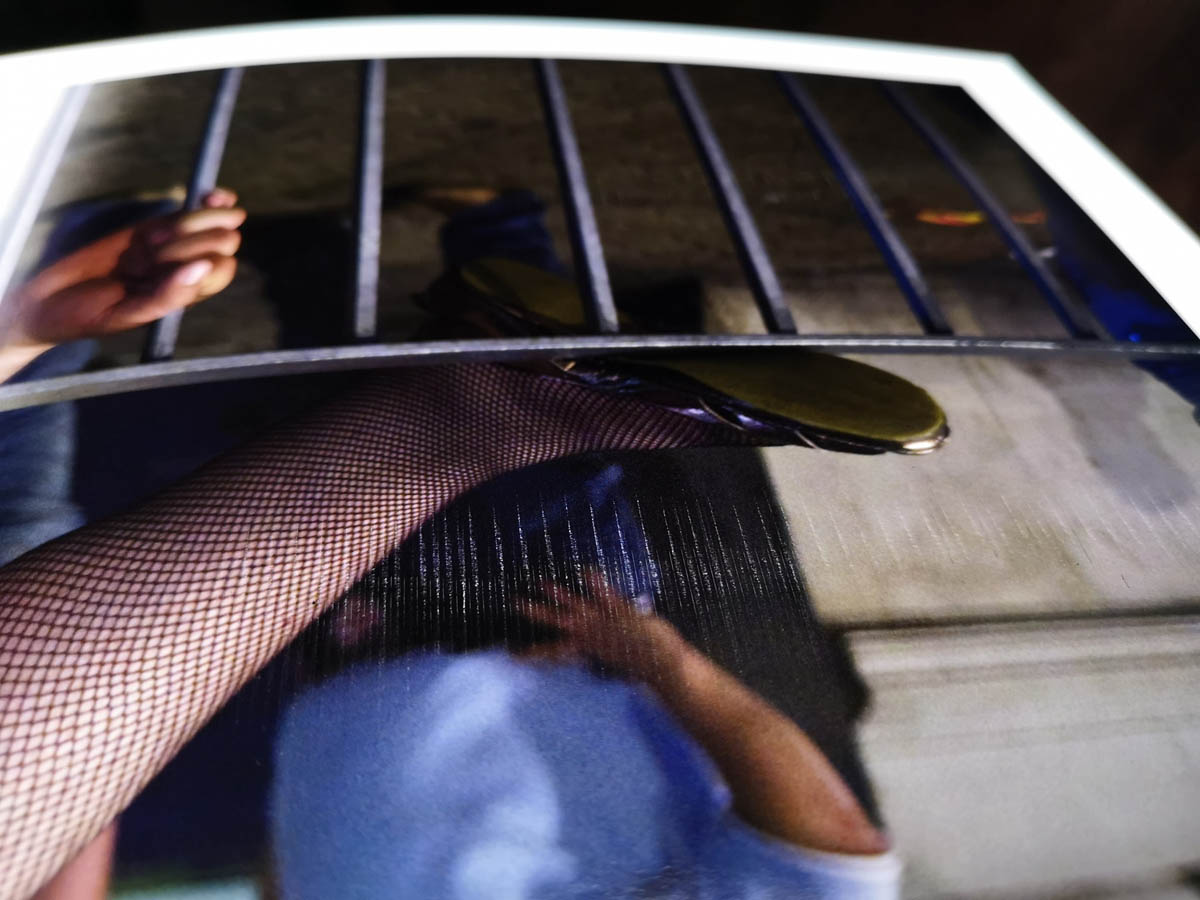 It was badly scratched again. So for some unknown to me reason this Hahnemühle Photo Gloss Baryta A3+ baryta paper warps during printing on my Epson SC-P800 and the printing head scratches it. In the box there were 25 sheets of this paper. Each of the five attempted prints got scratched. I have not made even one undamaged print. Enough. I went onto the Internet and started researching different papers.

The regular scratches on the surface of the print are called head strikes. When printing on an uneven paper the print head physically contacts and scrapes the paper where ever there is a bump. Also some papers buckle when the ink hits them and then the head scratches the newly formed “waves”.
If you get the head strikes go into the printing options and set the platen gap to wide, increase the paper thickness to a larger value, load the paper using the front feed and make another print. Listen to the printer’s printing sounds. If you hear something slighlty unusual it might be a sound of the head scratching the paper. You can look into the output tray with a flashlight to see if the paper is perfecly flat or wavy during the process.
If you get head strikes again I would recommend trying another paper.

Please let us know if you had similar problems or have other comments regarding the issue or my handling of it.